Governor Cuomo announced Monday that new DMV drivers license rules have taken thousands of dangerous motorists off New York State roads. The changes set an important precedent by mandating the permanent revocation of driving privileges for the worst drunk driving offenders. But since the new policies apply only to DWI violations, the state is still allowing thousands of reckless drivers to keep their licenses.

As long as they aren’t drunk, drivers like the one who struck 10 people on a Brooklyn sidewalk, killing a toddler, have nothing to fear from new DMV relicensing rules. Photo: Post 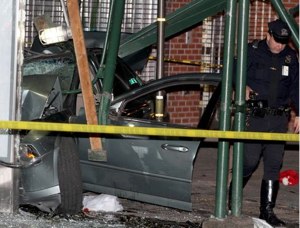 Previously, repeat drunk drivers whose licenses were suspended or revoked for up to a year could be relicensed in as little as seven weeks by completing an education program, and drivers with multiple DWI convictions did not permanently lose their licenses unless they were convicted for two DWI crashes resulting in injury.

“We have seen too many times the heartbreak and tragedy that results when a driver under the influence of alcohol or drugs gets behind the wheel,” Cuomo said, via press release. “Those who have continually shown a complete lack of regard for the safety of other drivers have no place on New York’s roadways.”

Since the rules took effect last September, the DMV has reviewed 3,891 relicensing applications from drivers with more than two alcohol or drug related offenses, according to the press release. Of those, 1,658 motorists broke the five-or-more DWI convictions rule and were permanently denied relicensing. The remaining 1,506 had three or four DWI convictions, and were denied relicensing for an additional five years, after which they will get restricted licenses and will be required to use an ignition interlock device for five years.

Said Cuomo: “With more than 3,100 potentially dangerous motorists kept off the road since September, it is clear these new regulations have already been a tremendous success at protecting law-abiding New York drivers, passengers, and pedestrians.”

Though this is certainly progress for New York State, it also shows how low the bar is set. After all, under the new rules, people with as many as four DWI convictions — not people who drove drunk four times, but those who were caught, arrested, and convicted four times — continue to drive legally.

This is not surprising, considering New York’s history of leniency on drunk drivers. It took a protracted effort to get Albany to approve tougher criminal penalties for DWI, which came long after drinking and driving fell out of favor among Americans at large. Today, even those who kill while driving drunk have a reasonable shot at little to no jail time.

And New York State has no similar sanctions against habitual dangerous and deadly driving that does not involve drugs or alcohol. According to the DMV, alcohol contributed to 3.1 percent of crashes in 2011. Meanwhile, driver inattention or distraction was cited as a factor in 19 percent of crashes; failure to yield in 15 percent; and speeding in 10 percent. In New York City, speeding kills more people than distracted driving and drunk driving combined, according to Transportation Alternatives.

In fact, the new DMV policies trumpeted by Cuomo are a step back from those proposed in “Charlotte’s Law,” which would permanently take licenses from those convicted of any of these offenses three or more times in 25 years: DUI or DWI; a violation of VTL 1146, which includes the state’s vulnerable user laws; or vehicular manslaughter. Under Charlotte’s Law, a person caught behind the wheel after a permanent license revocation, regardless of the reason for the traffic stop, would be subject to a felony charge and a jail sentence of up to four years.

Though it had bi-partisan support in Albany, Charlotte’s Law didn’t clear the legislature last year. If Cuomo is as serious about keeping dangerous drivers off New York roads as he seems, getting behind the penalties proposed in Charlotte’s Law would be a way to target those whose recklessness is not related to alcohol or drug use.

Cuomo also announced Monday that the state is studying the possibility of lowering the DWI threshold from .08 to .05 percent, the limit recently recommended by the National Transportation Safety Board.